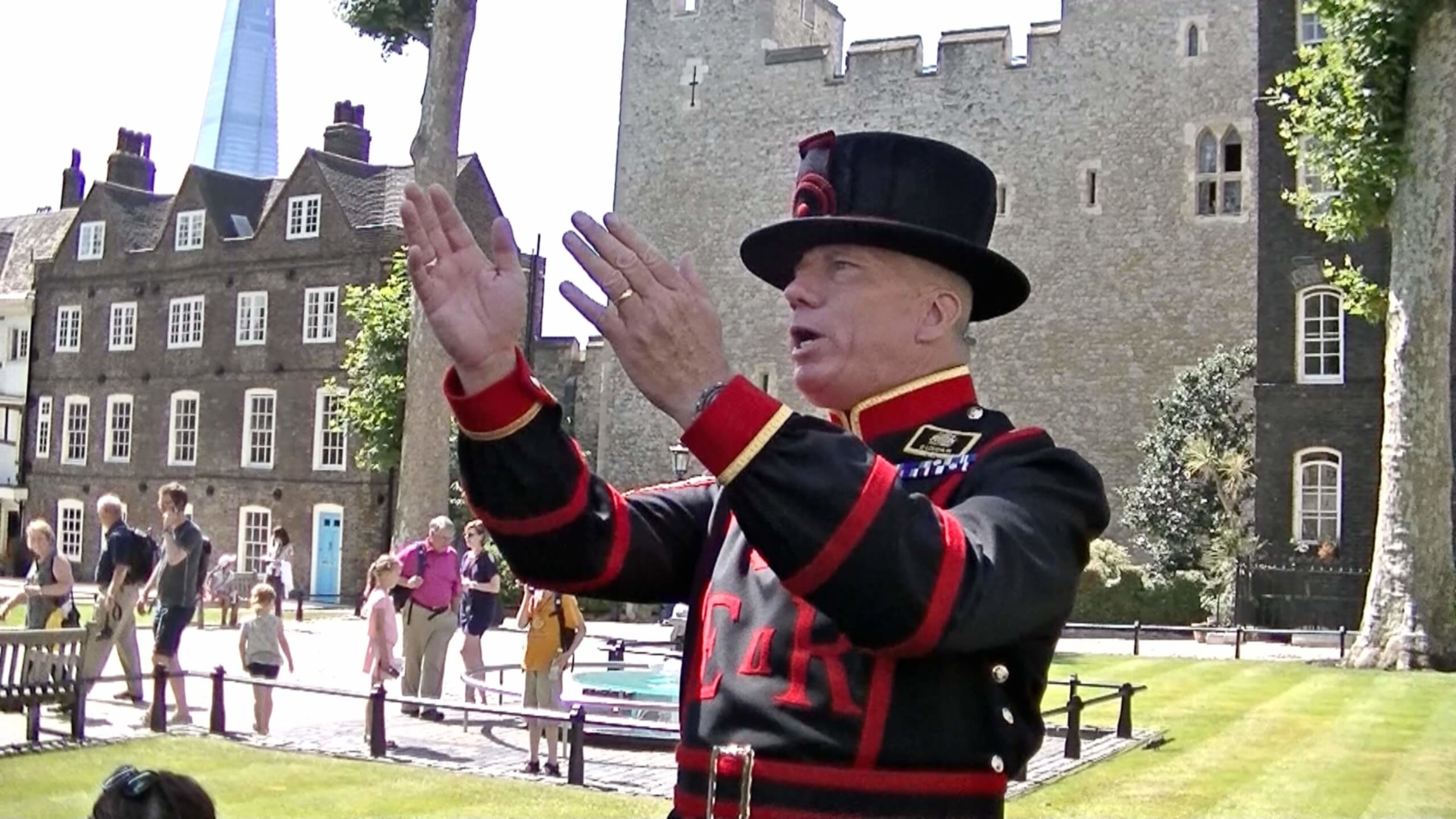 by Vicky Wells
with no comment
2014 Mega TripEuropeUnited Kingdom

Today began with another walk into Longfield, but this time it was to catch a train into Victoria Station and spend the day in London. As we were able to head into London “off peak” we could, of course, use our Two Together rail pass for a 30% discount on our return fare.

Note: It’s always better to get a return fare than one-way tickets. The return fare was £15.50 and the one-way fare £15.30. As you can see, it’s much for cost effective to buy return tickets.

Before we could get our train we needed to drop off a bag of laundry at the local cleaners. That meant lugging the bag on the walk into town. Unfortunately, Geoff got stuck with that duty.

the entire bag of clothes, the charge for a wash, dry and fold service was only £8. We didn’t think that was too bad and, besides, we didn’t really have any choice, there was no laundromat either at the resort or in Longfield. So, local cleaners it was. We told them we’d be back on Thursday to pick it up and they said “no problem”.

This was our first trip into London since arriving at our resort and it went quite smoothly. There was a ticket agent in the train station which meant we didn’t need to deal with the automated machine. We weren’t exactly sure how that would work with our rail pass and were grateful that we didn’t have to figure it out.

Walk Along the South Bank of The Thames

From Victoria Station, we headed directly to the Thames and began a leisurely walk along the south bank. We passed Big Ben and the Houses of Parliament as well as the London Eye and more.

As we passed the Globe Theatre (home of many Shakespeare plays), we decided to stop in for the tour. It was a planned activity for this day, but we also had prepaid tickets for the Tower of London. However, as we were standing right in front of the Globe Theatre, we decided to take the tour now rather than try to make time for it on the way back.

Two For One Tickets

As part of our research for this trip, we discovered that there were two-for-one ticket attractions offers for rail passengers. We just needed to have the two-for-one offer printed out (which we did at home and was part of our travel folder) and our train ticket for that day.

We were able to get the Globe Theatre tour at the two-for-one special.

On the tour we learned that this was not the original Globe Theatre but a carefully constructed replica. It was also not on the exact spot of the original, either, but it was close.

The tour was very interesting and full of history. We won’t go into any detail, though, as we wouldn’t want to spoil it for anyone who wants to take the tour.

The tickets for the Tower of London were not available with the two-for-one deal during July and August, so we booked online, from Canada, to get the best price possible.

We headed across Tower Bridge to the Tower of London to begin our tour.

To our mind, the best way to get much of the history of the Tower is to take one of the tours with a Yeoman Warder – a Beefeater. These men are the Queen’s personal guards and they must have been in military service for over twenty years before they can become a Yeoman Warder. They, and their families, actually live within the walls of the Tower of London and are LOCKED IN every night at 10:00pm during the Ceremony of the Keys.

The one that gave us the tour, along with several other people, was both knowledgeable and humorous (with sharp-witted British humor). The tour was thoroughly enjoyable and we were sad when it was over.

After the tour we were free to wander around on our own and visited the Crown Jewels, the White Tower (built by William the Conqueror over 1000 years ago), the rooms where people like Anne Boleyn and Elizabeth I were kept.

Executions at The Tower Of London

We were surprised to discover that there really weren’t many executions carried out at the Tower of London. Given the Hollywood productions of such historical periods you would have thought it was a common occurrence, but it really wasn’t.

A tour of the Tower is definitely recommended when visiting London.

Next up was the Tower Bridge Experience and we were able to take advantage of the two-for-one deal here, as well. Lots of interesting history here, not to mention the amazing view from the top of the bridge.

Walk Along the North Bank of The Thames

After the Tower Bridge Experience, we started our long walk back along the North bank of the Thames and back to Victoria Station to get our train to Longfield.

There were a few places where the walking path didn’t follow right along the edge of the river and we had to make a couple of detours onto regular streets and then pick up the path further on.

We finally made our way back to Victoria Station, tired after a thoroughly enjoyable day.

The train ride back to Longfield was enjoyable just for the mere fact to have a place to sit for a while (about 30 minutes, anyway), after having spent most of the day walking. We decided that it was best to take a taxi back to the resort from Longfield as it was getting dark and we didn’t relish the idea of navigating the narrow roads in the dark. Also, we were already tuckered out from the amount of walking we’d already done.