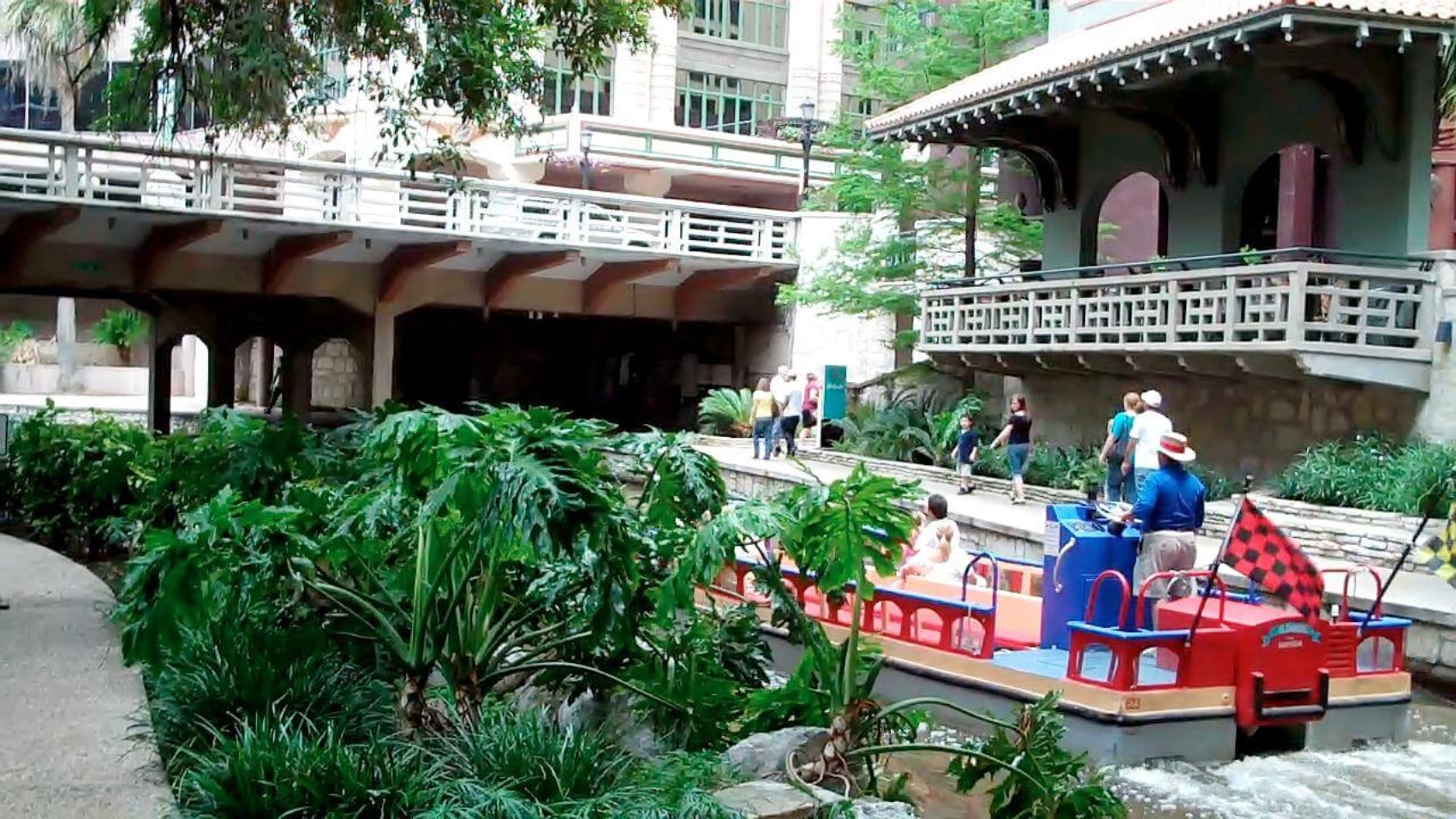 by Geoff
with no comment
Geezers In GearNew MexicoTexasTravel and LeisureUSA

We slept in again this morning so had to scramble a little to get everything packed away. We did take a few minutes to check the level of the river and it looked like it had crested some time in the night. Areas where we had walked taking pictures yesterday were now under eight feet of muddy water.

I don’t remember when I first became aware of San Antonio but I do remember what did it. A photograph of a boatload of happy people gliding along past little boutiques apparently in the center of San Antonio. One of the reasons we chose the route we did is so that we could “do” Riverwalk – which is what this area is called.

We made a quick stop at a Wal-Mart Super Center then told “Madge” (the alter ego of our Magellan GPS) to take us downtown. Even on a Sunday finding somewhere to park is challenging. Sure there are lots of parking garages charging exorbitant rates but we are trying to bring this trip in under budget so we went around the block and found some space in front of the San Fernando Cathedral.

With luck this happened to be right by an entrance to Riverwalk. Shit brown is not a good color for water, especially when it is part of a tourist attraction. The recent rain had stirred up a lot of mud and I guess it will be several days for things to get back to normal.

Anyway, my imagination of the Riverwalk experience had far outstretched the reality. Unfortunately we were running late and did not have the time to take one of the boat tours but we did stroll a ways along the footpath. It’s OK but it certainly isn’t Venice.

In fact, I’m sorry to say it but San Antonio is a tired looking city. There may be many nice parts we didn’t see but downtown and the route to the highway was all buildings in need of repair and sidewalk grass waiting patiently to be cut and weeded.

Our next goal was Carlsbad Caverns and the drive from San Antonio was uneventful but because of our late start it was almost 10pm before we got to Carlsbad, NM. Since we had no prior reservation we decided to stay at a highway hotel for the night.

One of the things we want to do on this trip is evaluate the pros and cons of camping vs inexpensive hotels. Very often, particularly in major cities, you can find highway hotels for less than the cost of a camp site. In many states highway rest areas have magazines full of coupons for hotel discounts. You can also find these magazines in the fast food restaurant that cluster around the highway ramps.

The cheapest we could find in Carlsbad was $39 for the night. It was remarkably unspectacular but at least it had a working refrigerator so we could pre-cool some more water for our Koolatron cooler. It was also an opportunity to recharge all our electronic gadgets – computer, cell phone, movie camera, iPod, tooth brushes, etc. But the advertised free WiFi just wasn’t happening so catching up with our posting will have to wait until tomorrow when we head to the Carlsbad Caverns.