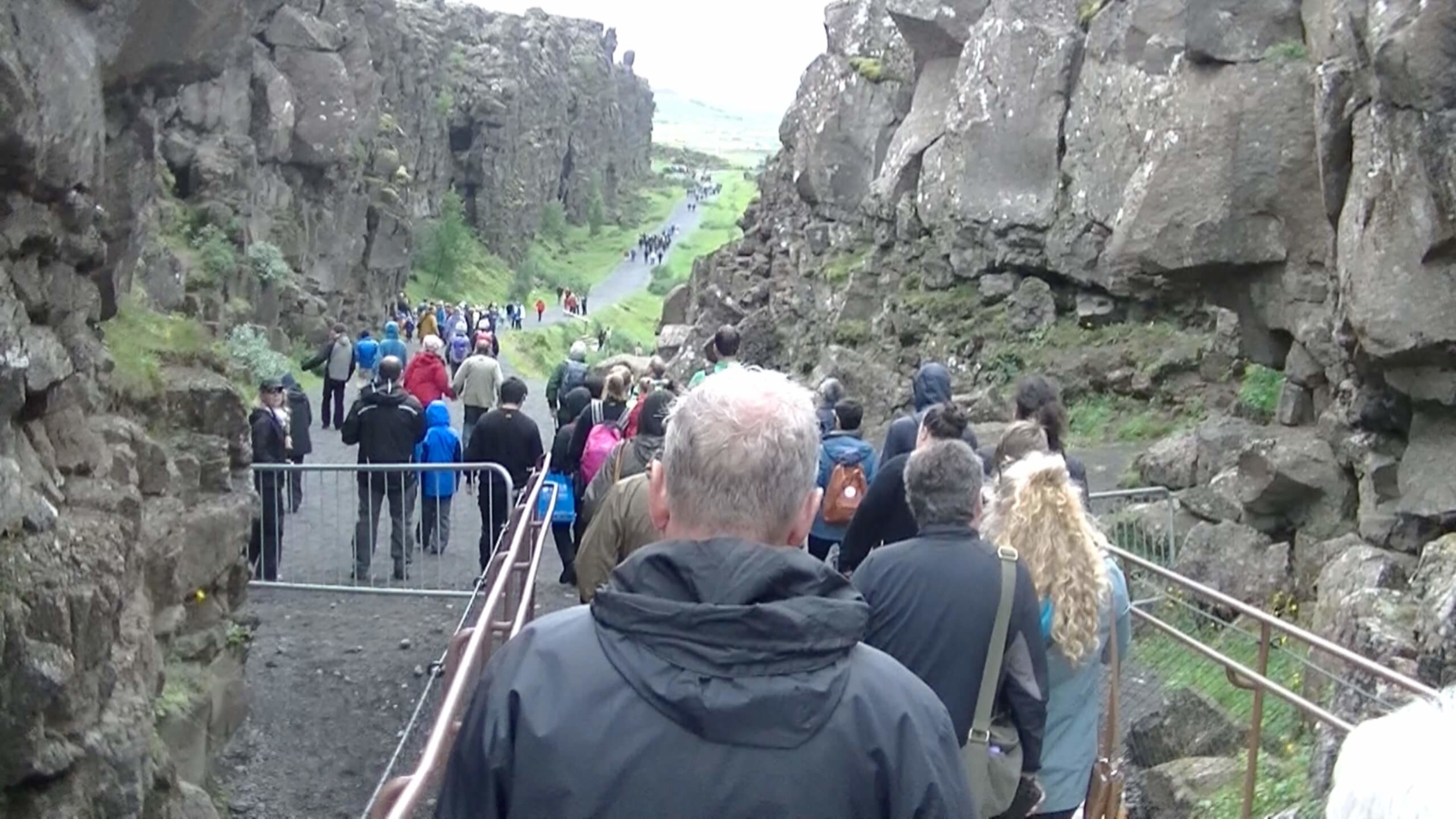 by Vicky Wells
with no comment
2014 Mega TripEuropeIcelandTravel and Leisure

What To Do In Reykjavik

When we were researching Reykjavik for things to do while we were there, we considered several options. We wanted to pick something that was the best value for money (the budget is always a consideration). Some of the experiences we considered included whale watching, various tours, local bus passes, Hop On, Hop Off buses, etc.

As we had such a short time in Reykjavik, we decided on the Golden Circle Tour, a day-long trip that would hit the highlights of the natural wonders of the area.

Getting The Best Price

The Golden Circle Tour is offered by many tour companies so, prior to leaving Canada, we began our search for the best tour at the best price.

We found one that looked like the best deal and, wanting to be sure, we called them to confirm the tour, the price and the pick up points. They picked up from many local hotels and bed & breakfast places, but we were staying in neither. They were, however, able to locate the closest pick up point for us when we gave them the address of our rental apartment (I needed to email them the address as, once again, I simply couldn’t pronounce it or even spell it for them because of the special letter that was included in the address – the one that looks like a stylized “d” with a cross – “ð”.)

As luck would have it, the very act of calling, apparently, entitled us to a 5% discount on the price and we’d already determined that this tour company had the best price anyway.

Needless to say, we went ahead and booked the tour, got the address of the pick up point and printed out a Google map with directions and estimated walking time. The walk should only take us about 10 minutes.

We arrived at the pickup point in plenty of time. I am a firm believer that it’s much better to be very early than just a couple of minutes late. So, we had about 20 minutes to wait but it was a pleasant morning.

Apparently smaller shuttles were dispatched to pick up the other travelers from their various hotels. These shuttles then converged on the tour company’s office in downtown Reykjavik where the large tour bus was waiting.

We were all ushered into the tour company’s office where we needed to exchange the printed confirmation of our booking for an actual ticket. Once that was done we were allowed to board the bus.

I am always amazed at the number of people traveling at any given time, in any given location. It seems no matter where we go there are always several tours and they all seem to fill up. Our tour was no exception. There may have been one or two empty seats on the bus and that was it.

At the beginning of the tour, we drove along a highway past the rather bleak Icelandic landscape. There are no real trees to speak of, a few bushes and the rest consists mostly of rocks, lichen and moss.

As you know, Iceland has a lot of volcanic activity resulting in lots of heat, lava, etc. just beneath the surface. They have harnessed a lot of this energy, using geothermal plants, to heat water and pipe it into Reykjavik. No house in Reykjavik has a hot water heater. The geothermal heated water is piped directly into each house. So, unlike us, they have two water lines coming into the house – one for hot water and one for cold. Also, no one has to shovel snow off their walkways. The hot water lines run right under that roads and walkways and melt the snow as it falls. What a great idea!

One little downfall, for us anyway, is that the hot water has a bit of a sulfur smell to it. When we thought that this was heated cold water (like we’re used to) we were hesitant to even taste the cold water from the tap. But when we ran the cold water, we didn’t notice the smell at all and the water tasted just fine. We understood why when we were told about the separate hot and cold water pipes coming into the house and the absence of any hot water heater. It’s only the hot water that has the sulfur smell and, apparently, that is added to the water to keep the pipes clean.

These pipelines, from the geothermal plants, run for miles and miles with little loss of heat/energy. Amazing!

Our first major stop on the tour (we stopped for a bit to get a good view of the geothermal pipelines) was the Rift Valley. This is an active tectonic area where the North American and Eurasian plates meet and are moving away from each other at a specific rate.

Our tour guide told us all to stay close as we only had a little time here and we might not find our way back to the bus. We were dropped off at the top of a cliff that overlooked the Rift Valley and would need to meet the bus in the valley. She didn’t bother to mention, or point out, exactly where the bus would be, nor did she make it very easy to follow her – no sign being held up like other tour guides, no attempt to make sure she had the whole group with her.

We managed to get separated from the group even though we were trying very hard to keep an eye on her. We can only surmise that she and the majority of the group moved on (there were several paths leading in many directions) while we were busy taking pictures and video.

At some point we just realized that we didn’t recognize anyone that was around us and didn’t see our tour guide at all. All we knew is when we were expected to be at the bus but that didn’t help much as we didn’t know exactly where the bus was supposed to be.

We saw two parking lots containing several tour buses. We stopped at each one (they were fairly far apart) and didn’t see our bus. We asked some of the other bus drivers but they just shrugged their shoulders and were particularly unhelpful. We then moved on to a small church that we were sure was part of the tour and saw a third parking lot that wasn’t easily visible from the other parking lots we had been to.  As we headed off in that direction we began to recognize some of the people from our group and then saw our tour guide and our bus.

By this time it was too late for us to visit the little church because we had wasted so much time trying to find our group and where the bus was parked, even worrying if they had, perhaps, already left without us.

We asked the tour guide why she hadn’t simply pointed out where the bus would be parked when we were at the top of the cliff as the area would have been easily visible from there. She just shrugged her shoulders and said, “That’s why I tell everyone to stick together.” That made no sense to us. If some people, like us, did get separated from the group, didn’t it make more sense for them to know where the bus would be, particularly with the fact that there were THREE parking lots for tour buses.

But, she just didn’t seem to comprehend our objection and we didn’t understand why she couldn’t grasp what we were saying.

We just got back on the bus, shaking our heads but glad to be back with the group anyway.

Finally! An Icelandic Word We Can Pronounce.

The next stop on our tour was Gullfoss or Golden Falls. Gullfoss, an Icelandic word, is pronounced just like it looks. So, finally, we had an Icelandic word that we could actually pronounce. A rarity, to be sure.

To our surprise, we pulled into a rather flat area and parking lot. It seemed an unlikely place to see what was supposed to be a very impressive waterfall.

This stop also included a restaurant that served traditional Icelandic soup. We had packed a lunch for the trip but thought that it might be a nice experience to have some authentic Icelandic soup. Well, not at almost $12.00 per bowl! We simply couldn’t believe how many people were buying it – and for whole families – at that price. However, everything at this cafeteria-style restaurant was outrageously expensive and we were certainly glad that we had packed a lunch after all.

Next to the restaurant was a boardwalk that lead down to the fall. That’s right – DOWN to the falls.

As it turned out, the falls were part of the large, somewhat narrow canyon that was carved into the landscape. And they certainly were impressive.

The water fell over several levels of large, flat steps into a narrow canyon and you could view it from two levels, accessed by either a gravel path or a wooden staircase. Trying to describe it in mere words would not do it justice. Even the pictures and video we took does not do it justice. If you find yourself in Iceland, we recommend a visit.

We had passed the geyser area on our way to Gulfoss and, after getting back on our tour bus, we headed back to spend some time there.

Our tour guide had hoped that the bus would be able to fit in a parking lot close to the geysers but when we got there that lot was full. The next option was to park across the street from the park, which is what happened.

It wasn’t much of a walk, so it didn’t really matter to us that the bus couldn’t use the closer parking lot.

Once again, words cannot express adequately the beauty and size of the geysers and the thermal pools. One geyser in particular went off on a regular basis and we were able to watch it erupt several times. You were never quite sure if you were going to get sprayed or not and you had to be careful not to get too close because the water was very, VERY hot.

We were also able to take some photos and videos of the geyser erupting. You had to be pretty patient, but it was certainly worth the wait.

Our final stop on the tour was a geothermal plant where the hot water was treated and, believe it or not, cooled down, to be sent down the pipeline into Reykjavik.

There was, of course, the requisite gift shop and a small cafe – both very expensive. But, on top of that, if you actually wanted to tour the plant, there was a charge for that, too. It equated to about $10.00 each for a 15-minute tour. We passed on the tour, as did most of our group.

The tour bus headed back to Reykjavik from the geothermal plant and we arrived back in the early evening. We were dropped off close to our road and this time we were able to find our way back to our apartment without assistance.

It was a pleasant day, a great experience, and we’re glad we went.

Geoff Also Made a Video of The Golden Circle Tour