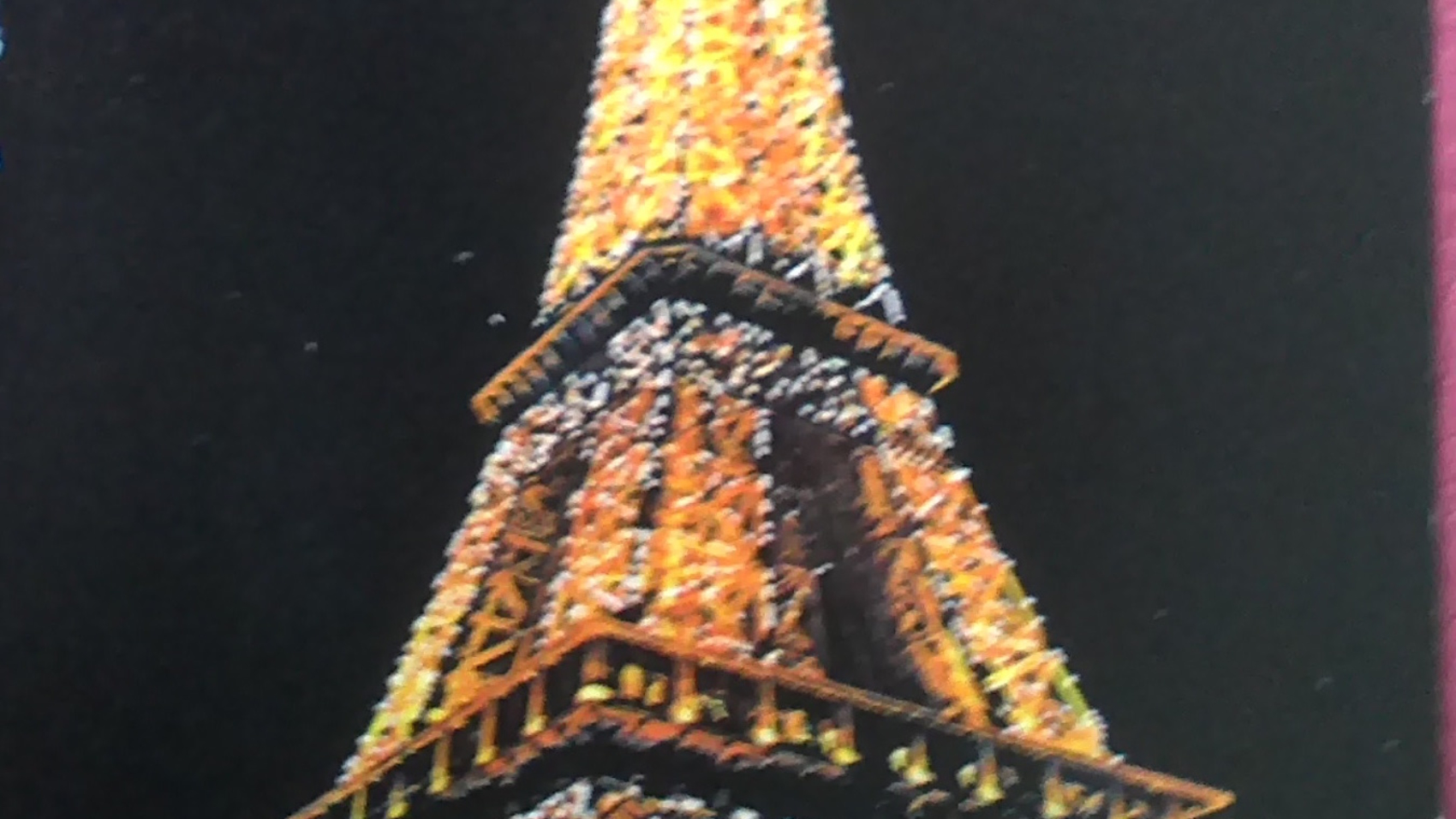 A year ago today (August 10, 2014), we took a bus, MegaBus to be exact, from London to Paris. It was a trip we were certainly looking forward to but things did not go exactly as planned. Read on!

Deal of the Century?

Before we get started, I’d like to brag, just a little, about the screaming deal we got on our tickets for this London to Paris journey.

As you know, we always do a lot of research for any trip we take and that included the most economical way to get from London to Paris.

While doing this research we came upon MegaBus who, as you may or may not know, is a master at offering a few seats at ridiculously low prices – just a few, mind you. But, you have to know when the tickets are first offered and you have to be quick on the draw.

I had been watching their site for a while, waiting for our date to come up. And, when it did, I pounced! I snagged us two tickets to Paris for the TOTAL price of £10.50! That was £5.00/each and a 50p online booking fee. When I checked their site again, just an hour later, the same seats were now £40.00/each.

How Were We Going to Take a Bus to Paris?

Well, when booking this trip, it was not clear exactly how the bus was going to get to Paris. We knew there were two choices, the Chunnel or the Ferry. We had no idea which way we would be going and figured, either way, it would be an adventure.

But, we’re getting ahead of ourselves here, so let’s get back to the beginning of this day’s adventure.

In order to get to London in time to catch our bus, we determined that we had to take the 7:30am train leaving from Longfield.

We packed as much as we could the night before and set the alarm to give us enough time to have a shower and a light breakfast.

Much to our delight, one of the people we had met during our stay offered to drive us to the train station. That meant we didn’t have to worry about calling a cab. And, true to his word, he was ready and waiting for us in plenty of time to get us to the station.

I am quite certain that the instructions on our tickets said to be at the station two hours before departure. As our scheduled departure was 10:30am, that meant, of course, we were expected to be there by 8:30am. And, we were pretty much on time.

However, when we tried to check in, we were told that the check in process for the Paris bus would not begin until 9:30am. What? That was only an hour before. The clerk just shrugged her shoulders and told us to come back at 9:30.

Any other experiences we’ve had with using Victoria Coach Station have been somewhat disorganized but, for some reason, today was downright chaotic and extremely overcrowded.

We were being jostled and bumped into on a regular basis and finding any place to sit appeared to be an exercise in futility.

There were no clear lines for any of the scheduled buses, no consistent use of gate numbers and any announcements were, to our ears anyway, too garbled to comprehend.

After checking in at the appropriate time, we once again settled in to wait – as much as we could, anyway. The crowds just kept growing and no one seemed to be leaving. We’re amazed that tempers weren’t flaring at this point, but most people, though disgruntled, were keeping their cool.

When our scheduled departure time came and went, we went back to the ticket clerk to get an update. We were told there was a delay but they couldn’t be specific as to how long the delay would be.

After talking with fellow travelers we discovered that, of all days, today there was a London-wide bicycle race and most of the major thoroughfares were closed off with lots of detours causing lots of road congestion. Wonderful!

But we remained hopeful that we would get on our way soon and get to Paris at a reasonable time. Silly us.

Finally on Our Way – Sort Of

After a more than two-hour delay, we finally were directed to our bus. It didn’t pull up to one of the gates. We were lead to our bus, parked a few yards away from the terminal.

And, we had to be paying attention to the muffled announcements and the constantly changing gate information or we could have easily still been waiting!

When we finally pulled away from the station, within just a few feet, the bus stalled. Our driver promptly restarted the bus only to have it stall again after only another few feet.

At this point, a collective groan issued from most of the passengers and the driver, also, seemed frustrated and annoyed.

Thankfully, after the third restart, the bus remained running and we all breathed a sigh of relief.

Missed Our Appointment on the Chunnel Train

Because of the delays, we had, apparently, missed our bus’s scheduled appointment for our spot on the Chunnel train. The driver had no choice but to wait until we were rescheduled for another available spot.

He had no idea when that might be so we were cautioned not to venture too far from the bus in case we got a spot and had to move quickly. When he did finally get notified of our appointment, it was almost a two-hour wait.

We were beginning to get concerned about when we would actually make it to Paris. We knew that the hotel we had booked did not have a 24-hour front desk.

Never having experienced the trip through the Chunnel, we were uncertain as to what to expect. Would we all have to exit the bus and, perhaps, pick up another bus when we arrived in France?

We were assured by the driver that this bus would take us all the way to Paris.

We watched in fascination as we approached the train and other cars, trucks, campers vans and more loaded before we did.

The train cars are huge! And our bus didn’t even take up an entire train car. We’re still in awe of how they were loaded in the first place, just driving on from the station platform onto the train. I was certain there was no way that our bus was going to make it.

But, of course, it did. All I can say is I’m sure glad I wasn’t driving. It would have seriously freaked me out.

Check out this video of our bus getting loaded into the train car and being unloaded in France.

A mere 35 minutes later we were in France and the whole unloading exercise went without a hitch and was totally efficient.

It’s obvious that they do this several times a day and they certainly have it down to a science.

No Customs or Immigration

We have marveled before at how there are no customs or immigration requirements as we traveled throughout the EU. We simply got on the train in the UK and got off in France. And, it would be like that the whole time. And we would travel through France, Spain, Italy, Germany, Denmark and even Malta, Tunisia and The Azores (Portugal).

Are We There Yet?

Now that we were finally in France (already well past the time we should have already been in Paris), we assumed that we would make a bee-line to Paris and attempt to make up some of the lost time. Sadly, making up the time, did not appear to be a priority.

Only a short distance into France, we pulled off into a gas station. Because of all the delays, our driver had used up his allotted time for that day and we would need a replacement driver, who was waiting for us at this gas station.

The hand-off was relatively quick and painless, but it was still another delay.

At our next stop, Boulogne, we dropped off one of the passengers at the designated stop. However, after that, we made another stop – still in Boulogne – to pick up another passenger and to drop off our previous driver.

And, as if we weren’t already late enough, we then made an unscheduled detour to drop off the person we had picked up in Boulogne. No idea why we needed to do that, or why it was even allowed.

Lights on the Horizon

From then on, each time we saw lights on the horizon we hoped that maybe, just maybe, we were approaching Paris.

Our hopes we dashed many times during the journey.

At almost 1:00am, we FINALLY arrived in Paris. That was SEVEN hours late.

The original plan was to take a local bus to our hotel. We had, naturally, researched the local system and even knew which bus to take. It would take us about 30 minutes and get us very close to our hotel.

However, at this time in the morning, nothing appeared to be running. The “bus station” didn’t even appear to be a station, just a place where buses were parked.

Call to Our Hotel

We weren’t traveling with a cell phone on this trip so I asked our bus driver if we could borrow his cell phone so we could call our hotel to see if they were even still open. We knew they didn’t have a 24-hour front desk, but we had expected to arrive in Paris much, much earlier than this.

The driver was happy to let us use his phone, thank goodness.

We were ecstatic when someone actually picked up the phone and it took all of the French I know to get across where we were and to find out that the front desk clerk was just about to close up.

We promised we would get a cab right away and be there within half an hour, or so. He said he would wait if we didn’t take too long.

The driver promised us that MegaBus would reimburse us for the cost of the cab to get to our hotel as we had arrived so late.

Not only did MegaBus do that, they also refunded the cost of our tickets. Great customer service. We would definitely use them again as, we’re sure, these delays were a freak occurrence and out of their control.

We had to do a little walking from the bus station to a busy corner in order to hail a cab, but we got one in short order, showed the driver the address of the hotel and arrived within the timeframe we had given the front desk clerk.

Happy to Check In

We were so happy to find that, true to his word, the clerk was indeed waiting for us. And, promptly locked up after he check us in.

We had made it! We were in Paris!