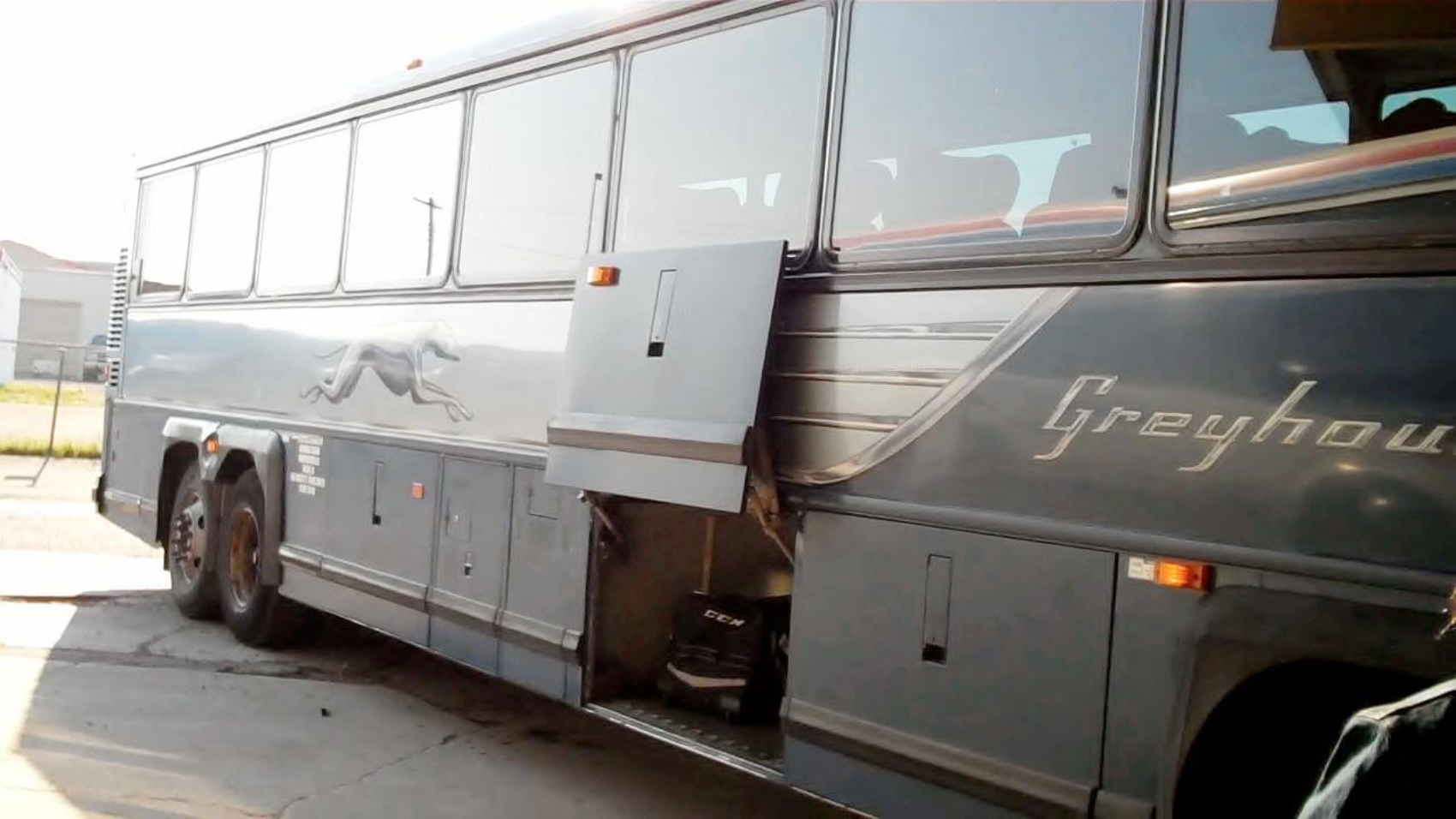 by Vicky Wells
with no comment
2014 Mega TripCanadaEuropeIcelandOntarioTravel and Leisure

Well, it’s been a year since we started our last adventure, so we figured it was time to start blogging about it, and also try to figure out where the heck a year went!

While we were traveling we didn’t have much time to blog and frequently didn’t have consistent internet access. So, we’re now back home, well rested from our adventure and have decided to blog by looking back a year. For us, it’s a great way to remember the wonderful time we had so it doesn’t fade from our memories so quickly.

We hope you’ll enjoy following along as we visit some amazing places.

But, yes, this trip started with us jumping in front of a bus – a Greyhound bus to be exact.

Although the place that we had to wait to catch our bus was not a long walk from our home, we had more luggage than we cared to carry that far. The solution: we drove to the designated spot, dropped our luggage and I stayed with it while Geoff took the car back home, prepared it for being left for a few months and then walked back to where I was waiting.

But, we still haven’t gotten to the reason we would have to jump in front of a bus yet.

You see, we live in a very small town in Northern Ontario. Our town, at that time, was not a regular stop on Greyhound’s schedule – you need to wave down the bus. Seems easy enough – right?

Well, at 6:00am, while it was still dark, the idea of a bus driver seeing us frantically waving our arms at the side of the road seemed less than certain.

Trying to be as Certain as Possible

We had, of course, called the nearest Greyhound station a few days before to be sure they left a message for the driver that there would be passengers (us) waiting. However, we also knew that the only thing that station could do was leave a note for the driver as there would be no official actually at the station when the driver made his designated stop there around 4:00am. We had to trust that the people we spoke with would remember to leave the note and that the driver would remember to pick it up.

Now, this might seem like a lot worrying. Couldn’t we just get the next bus if we missed this one?

Well, no. If we missed this bus then the entire trip was in jeopardy. While this bus got us to Thunder Bay way ahead of our flight time, the next bus, which was more than 12 hours later, would mean that we would miss our flight.

As we like to do, everything was pre-planned and pre-booked months in advance for various reasons but mostly to get the best prices so the trip wouldn’t be too expensive. Near the end of our journey we faced another very tight schedule that could have been a disaster if we missed connections, but that’s in another post.

We were pleased to see another couple was also waiting for the bus this early in the morning. They said they had also asked Greyhound to make sure the driver knew they’d be waiting.

The estimated time for our bus to arrive, according to Greyhound’s website, was 6:15am. Well, 6:15 came and went, as did 6:20, 6:25 and 6:30. Naturally, we were all speculating what might have happened; an accident on the highway, bus breakdown, etc. We were consoling ourselves with the fact that we had been there so early that we couldn’t possibly have missed the bus. Right?

Just as we were about to call Greyhound, hoping that someone would be available, some very large headlights appeared in the distance. Now, we’d already seen many transport trucks go by, mistaking many of them for the bus, but this time we were almost certain.

Time to Jump in Front of the Bus

Geoff ran to the edge of the highway and began to wave his arms, hoping that he didn’t have to actually jump directly in front of a moving bus. As luck would have it, the driver saw him, using his turn signals to indicate that and we all breathed a collective sigh of relief. The bus may have been a bit late, but we still had lots of time to get to the Thunder Bay airport.

Once we arrived at the Thunder Bay Greyhound bus station, we immediately grabbed a taxi and headed directly to the airport.

The taxi fare was a little more than expected – about $30 Canadian. I guess we didn’t realize just how far the airport was from the bus station.

We settled in at the airport to wait for our first of three flights that we would be taking today. Once again, all of these flights had to leave on time (or close to) for everything to work out. The one advantage was that we had booked all of these flights directly with IcelandAir, so if we missed any of them because of delays, cancelations, etc., they would have to reschedule us

Here’s the schedule of what needed to happen today (We’ll talk about the schedules we had to hit tomorrow – tomorrow).

Why So Many Flights?

You may be asking yourself at this point, “Why so many flights? Surely there’s a direct flight from Toronto to Reykjavik.” Well, yes, there is. However, we’re always looking for the most economical way to travel because, well, we’re frugal. 😉

Anyway, we missed out, by a day or two, on the least expensive fare involving only two flights. That left us with the three flight option, at a significant savings, so that’s what we booked.

Yes, it made for a long day that was a little stressful, but, as long as it all came together as anticipated, we decided it wouldn’t be that bad.

It All Comes Together

As it happens, with some tiny glitches, everything came together and we were on our way to Iceland!