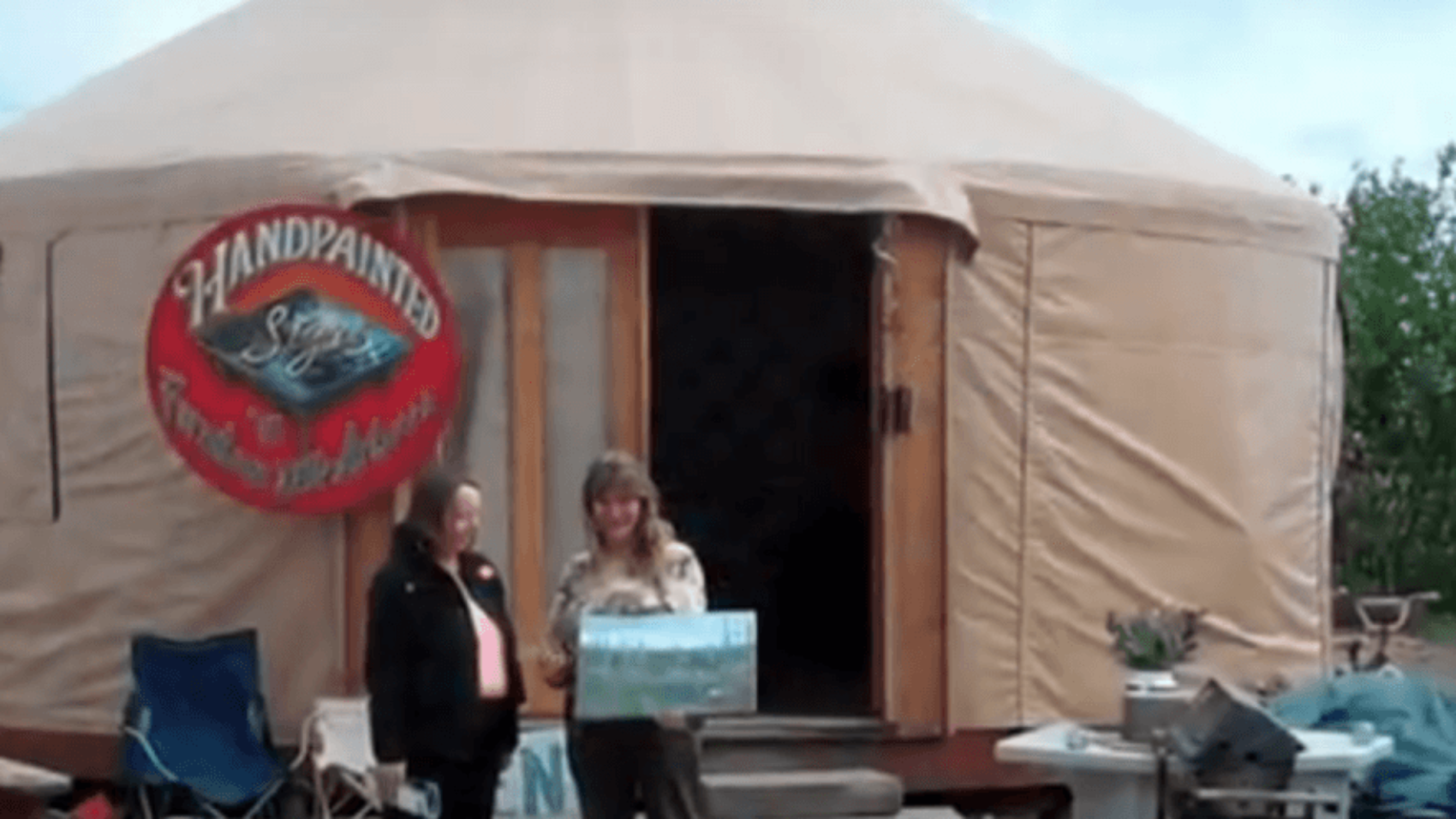 The weather was clear and sunny and in the mid-50s. A bit cool for us but, hey, we’re in Alaska, so most people used to living here were welcoming the warm weather. We certainly enjoyed the fresh air and sunshine.

Yurts for Sale and for Rent

On our trip into downtown Homer we passed a Yurt Village under construction and decided to stop in.

The Yurt Village will be home to local artisans, however, you can also purchase a yurt – in several different sizes and configurations – as well as rent them, already constructed and in some lovely locations, for your vacation.

We spoke with the owners of Nomad Shelter – http://www.nomadshelter.com – and got a brochure and price list as well.

We also stopped in on one of the artisans in this village who do some lovely art, furnishings and more. You can check them out at http://www.handpainteddesign.com

Homer Spit has a lot of shops and restaurants. The most famous restaurant is most likely the Salty Dawg Saloon which also has a working lighthouse.

We popped our heads in for a bit and it looks like the kind of dive that everyone should visit if they find themselves in Homer, Alaska.

Homer seems to be a destination of choice for a lot of RVers. There were certainly a lot of them around in various RV parks. We did hear, however, that some of the RV parks charge as much as $100/night – OUCH!

There were also several very hardy campers, too. Apparently the camping areas are run by the government and the rates are much more reasonable – around $8/ night. Now that’s more like our budget, but I’m not sure you could talk me into camping in Alaska. I was quite cold enough, thank you, when we camped at the Grand Canyon.

Being the home port for the Time Bandit of the reality series The Deadliest Catch is also Homer’s claim to fame.

Although I can’t claim to follow the series, I have seen a few of the trailers and it looks quite exciting.

We were fortunate enough to see the Time Bandit in port while we were in Homer.

The cruise line changed performers for the rest of the cruise while we were in Anchorage.

The show would have been much more enjoyable, but Geoff wasn’t feeling very well and so he wasn’t able to enjoy the performance.

Immediately after the show, just when we were about to head to the dining room for dinner, Geoff said he wasn’t feeling very well and he was looking pretty green around the gills so we headed back to our stateroom.

Almost immediately after tucking him in bed he got violently ill. We spent the rest of the evening in our cabin. Geoff didn’t want anything at all except a glass a milk. We ordered that and a chicken caesar salad for me and had it delivered to our cabin.

We watched some TV for a while but Geoff was really tired and a bit shaky, so we thought it best to have an early night.

We have both been overindulging since being on the cruise, but Geoff and I frequently have the same thing and, fortunately, I’m fine.

That’s not a comment on the quality of the food on this cruise. Everything has been wonderful. But, it’s difficult, I’m sure, when you’re catering to so many people and things have to be done well in advance and kept warm, too.

I sure hope he feels better tomorrow. The worst seems to be over but he’s feeling pretty shaky.