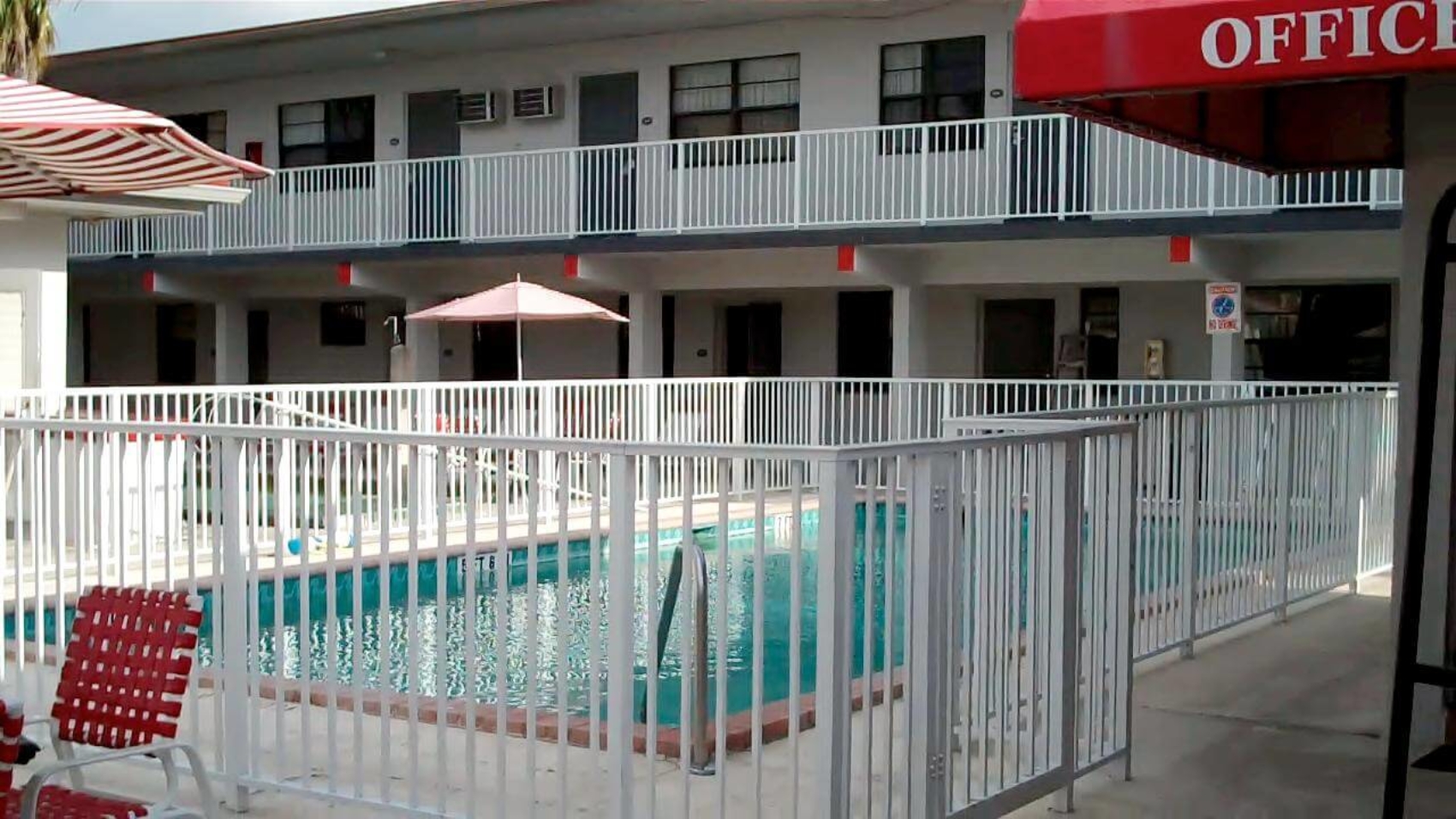 Before embarking on our “official” trip we spent two days in the Econo Lodge in Dania Beach to give us a chance to get organized and get the car serviced. I guess those two days count as T minus 2 and T minus 1.

We got a really good deal on the stay as we have a Choice Privileges card and Econo Lodge is part of the group. We had earned a free night stay with our loyalty card and paid for the other night.

Although older, the motel was clean, the pool was great and the staff were friendly.

All-in-all it was a great deal for the money.

Mostly running around and shopping

Even though today is officially the first day of the trip, we still had a lot of running around to do and a lot of things to buy.

We made a final stop at our mail forwarding address to make sure there wasn’t any more mail for us before we left.

The poor car just looked so packed full of stuff. Truly, we have yet to get organized but hope this process will happen along the way.

Thank goodness for our Magellan GPS. With a few minor exceptions it has guided us accurately to wherever we told it we wanted to go.

A Trip to the Apple Store

Our running around included a trip to the Apple Store at the Mall in Aventura.

It was time for a new computer and this one would be Vicky’s first new Mac – as opposed to a hand-me-down from Geoff, which is what usually happened whenever Geoff upgraded.

We took video of our new computer but the Apple store employee didn’t want to be in the video, so it’s kind of short but a nice reminder of when we got it.

February, 2019 Update – Vicky still has this computer and is still using it!

Recap of our equipment

So, let’s do a quick recap of what we’ve actually got with us for the trip. In order to save money and try to bring this adventure in on budget we plan to do some camping along the way.

Now, there’s a real leap of faith. I haven’t camped in more years than I care to admit to and the same goes for Geoff. But, we tried to select the equipment we would need logically. We’ll see how that works out.

What we have for the trip:

*Koolatron cooler – that’s the type that can be either hot or cold and plugs into your cigarette lighter or power outlet in your car/RV.

*Sportz SUV Tent – this tent actually attaches to the back of your SUV giving you way more space with the tent and SUV combined. We’re traveling in a 1997 Jeep Grand Cherokee, so this kind of tent seemed ideal for us. (More about setting it up later)

*Truckbedz – we opted for an inflatable mattress that was designed to fit the back of the Jeep. It inflates and deflates quickly and this also meant that we wouldn’t have to sleep on the ground – something I particularly didn’t want to do.

*Jetboil Helios cooking system – this was purchased with an eye to both size and convenience. Reviews on this system also seemed pretty good. (More later about cooking our first supper with this system)

These were the main purchases. Other items that were, of course, needed were dishes, cutlery, cooking utensils and the usual stuff like paper towels, etc.

A Car Full of Food

One of the toughest things was keeping down the amount of food we were purchasing. For one thing, food is very expensive in the Bahamas, so everything looked like such a good deal. However, the cooler and car will only hold so much. We had to be really conservative on anything that needed refrigeration.

Our first grocery shopping trip was to Costco. Now that was really difficult because of the sizes normally sold there. We did buy some stuff but not nearly as much as a normal Costco trip.

Costco has always been an outing for us and it’s just amazing how much will just jump in the cart. However, we exercised surprising restraint and only bought things like canned chili and packets of soup in a bowl.

Just before getting to our camping spot for the night we stopped at a Wal-Mart Super Center to pick up just a few more items. We got a set of Coleman dishes and cutlery so we actually had something to eat dinner on, as well as a few utensils like a spatula and the always-essential can opener.

With the car now bulging (and I thought I may have heard a few groans as well), we headed to Lake Como Resort to camp for the night.

After finding our campsite we began the process of figuring out the tent. We opened it up, checked all the parts we had and began to read the instructions. I guess we looked a little perplexed as a neighbor came by to ask if we needed any help. He had noticed us poring over the instruction booklet.

In a bit the methodology became clear and we started to assembly the tent and attach it to the car. As with anything new, once you’ve got it figured out subsequent attempts become easier.

Then our thoughts turned to dinner. Geoff set up the Jetboil, and they sure named this product right.

We were having spaghetti and meat sauce for dinner and we began boiling the water for the spaghetti which, amazingly, only took a minute or two to boil.

When it was ready we took that off the burned and cooked the ground beef and then added the spaghetti sauce that also cooked in record time.

It was a bit awkward but everything came out great and we enjoyed spaghetti and meat sauce as well as salad and garlic bread for dinner. Not bad for our first camping meal.

It was now time to think about heading off to bed for the night in our new tent. At this point we began to question if we wanted to sleep in the back of the car, which seemed like it would be cramped.

Remember, we’re used to sleeping in a king-size bed. So, we decided to inflate the mattress and just lay it on the floor of the tent.

Well, as I mentioned earlier, it was specifically made to fit in the back of the car, so it has a rather odd shape. We made a valiant attempt to sleep on this hourglass-shaped mattress on the bottom of the tent, but neither of us could sleep because we kept falling off the edge of the mattress.

About 2am Geoff suggested that we put the mattress in the back of the Jeep where it was meant to be in the first place. So that’s what we did and you know what, because we had the sides of the car to lean against and we weren’t falling off the edges of the mattress, we actually felt like we had more room and were able to get a reasonable amount of sleep.

After our first day of camping I’m pleased to say that we are still married, still talking to each other and both without any major injury.