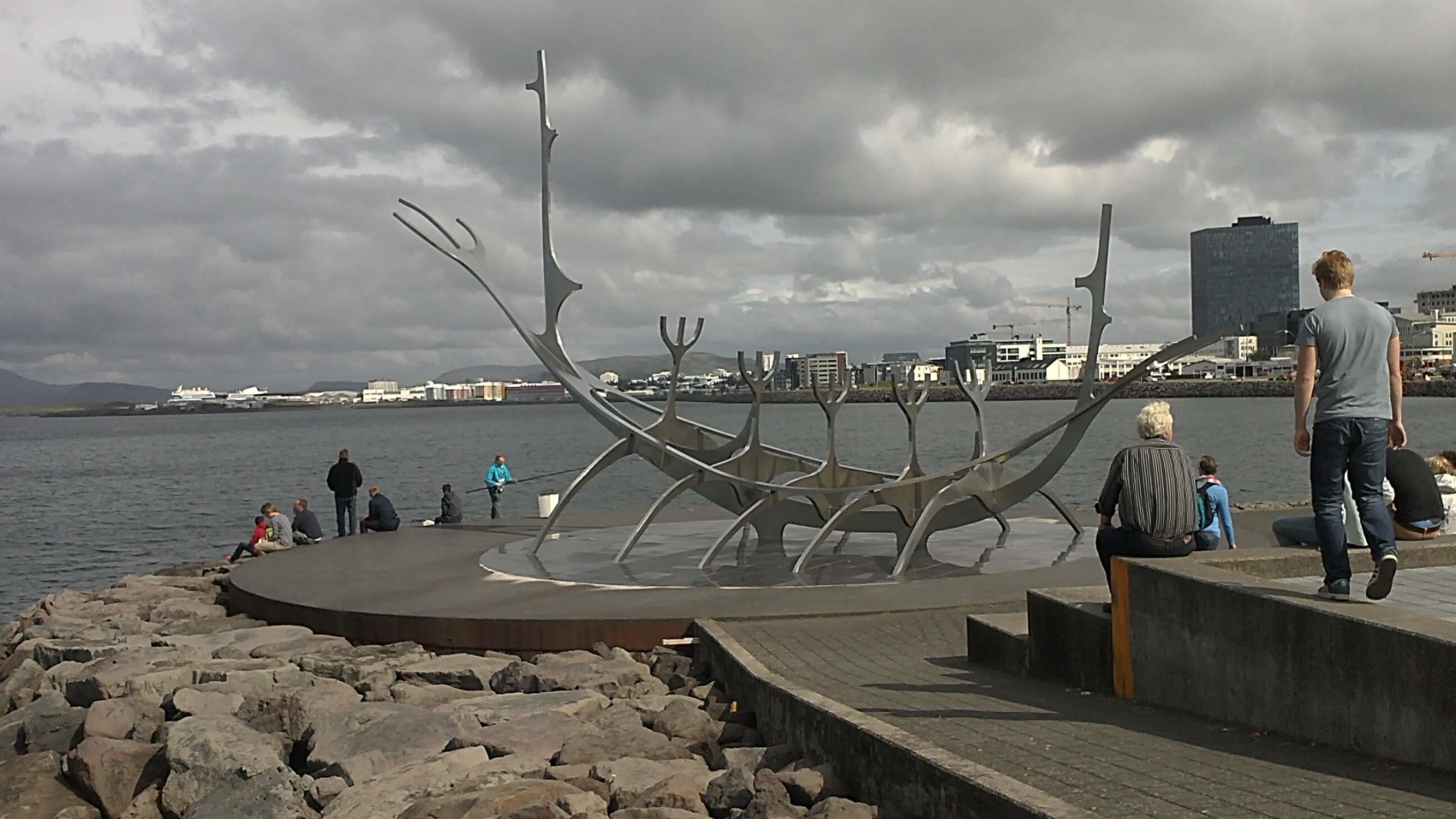 The main street in downtown Reykjavik sports many, many souvenir and gift shops. However, everything is very expensive. That just seems to be the way it is in Iceland.

It was fun browsing through some of the shops and looking at all the cute things they had for sale, but we were never actually tempted to buy anything.

Well, that’s not entirely true. We both loved a t-shirt the poked fun at the difficult Icelandic language. It was a simple t-shirt that read “What part of Eyjafjallajökull don’t you understand?” (Yes, this is what we named one of our posts.) We both thought it was perfect but at $30 for a t-shirt we couldn’t justify the purchase. As we have said before, on such long trips, budget is always a consideration and this was just the fourth day of our trip.

As it turned out, our only souvenir of Iceland was the plastic grocery bag from the Bonus supermarket. (see our first post about Iceland) And, of course, our pictures, videos and memories.

We browsed many of the restaurant menus as we walked through the downtown area and can confirm that it is definitely expensive to eat out here. One particular sign caught our eye though and we had to do a double-take. At first glance, we thought the name of the restaurant was The Whale and Puffin Diner and thought that was a really cute name.

But, no, it was a restaurant actually offering a whale and puffin dinner! That’s right – real whale and real puffin – for dinner! We were shocked and dismayed that such a thing was allowed.

The walk through the downtown area eventually lead us to a public swimming pool and steam bath complex that we had identified with the help of Google Maps. It was one of the first ones to be built in the city but was still in amazing condition.

Everything is, of course, heated with geothermal water/energy.

Some North Americans may find it a little uncomfortable in the locker rooms and shower area. There are signs on the walls indicating, by way of pictographs, which parts of your body to clean particularly well, with soap, before entering the pool and hot tub area. Also, you are required to shower without your swimsuit on and there are no enclosed shower stalls. There are, however, a few enclosed change rooms in the locker room area although most people don’t bother with them. And, yes, swimsuits are required in the pool, hot tubs and steam bath.

The pool was huge and while not particularly cool, it was not anywhere near as warm as the geothermal hot tubs that were located outside on a balcony-type terrace with a lovely view of the immediate area.

There were two hot tubs at two different temperatures. The larger of the two was relatively easy to get into, although pretty hot nonetheless. The smaller one was very, very hot and we were only able to stay in that one for short periods of time.

The steam bath was quite small and we were the only ones in it at the time we used it.

We found we preferred to alternate between the two hot tubs and the pool and did that for quite a while before leaving and heading back home.

Getting Used to the Bus System

This time we decided to take the other bus route home as it seemed to run more frequently and we had no difficulty recognizing where we needed to get off and we easily found our way back home.

So it really didn’t take us that long to get our bearings and be able to find our way around some parts of Reykjavik.

But this is our last day. Tomorrow will be a very early morning for us in order to catch our 7:30am flight to Gatwick.

A Note About IcelandAir

When we originally began planning this trip, Iceland wasn’t even part of the equation. The trip was going to start in the UK. So what happened?

So, our reasoning was, “Hey, we’ve never been to Iceland. Let’s go!” It only added three days to our trip, no more on the airfare, and only three nights accommodation. We figured it was worth the relatively small additional cost it added to the trip and jumped at the chance to accept IcelandAir’s offer and spend some time exploring their country.

We are glad we did.