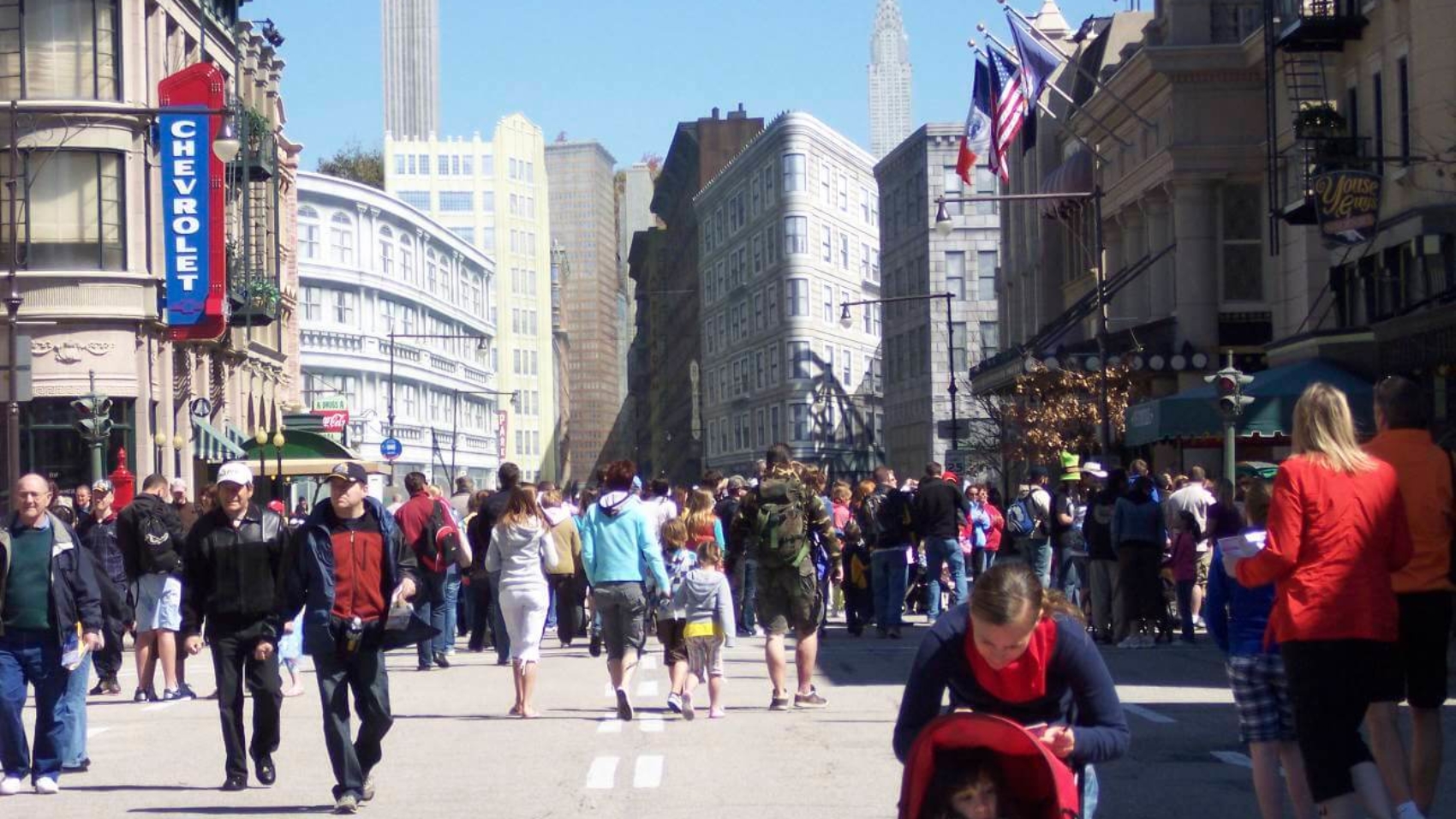 Geoff had been to the Magic Kingdom with his daughter, Julie, shortly after the park opened and it was a wonderful experience they will both always remember. We had visited the Magic Kingdom and Epcot in 1988, just after we got married and it was equally memorable. Unfortunately the Disney Hollywood Studio will be memorable in a whole different way.

This park is tired and at least 20 years out of date. The Great Movie Ride is a prime example. You start by snaking a line through a movie theater showing clips from old “classic” movies, then the doors open and you climb into one of several open wheeled vehicles. Your conductor begins his patter and the vehicles start to move through the course. You’re in a warehouse and moving slowly past bad sets representing old movies. A few sound effect, smoke and some department store mannikins pop up and down, then it’s over. Sorry Disney, but this is lame beyond belief.

“Lights, Motors, Action” is a demonstration of how movie vehicle stunts are produced. The timing and precision of the stunt drivers is just incredible, as is the fact that they do this 3-4 times each day.

The Indiana Jones show is less thrilling but still worth seeing. It is basically a live recreation of the scene from The Raiders of the Lost Ark where Indie fights the big Nazi in front of the circling plane that is about to blow up due to the fuel leaking onto the ground.

Many of the Disney rides are the hydraulic type where you sit in front of a small movie screen and get shaken in sync with the images. Our first encounter with this type was at the Luxor Casino in Las Vegas over 15 years ago and it was much better than anything we saw today. You’ll find similar rides in any local amusement park or tourist attraction such as the CN Tower in Toronto. The Star Tours Ride is one of these hydraulic types that is based on Star Wars and is supposed to represent a droid pilots first trip to Tatooine. It is over in less than a minute and is totally uninspired.

It’s much more fun watching young audience members outside the ride building fighting Darth Vader with plastic light sabers as they are indoctrinated in the ways of The Force.

The closes thing to a thrill ride is the Twilight Zone Tower of Terror which is an elevator that free falls for supposedly thirteen stories. The only roller coaster is the Rock ‘n’ Roller Coaster which is an indoor ride in total darkness. I guess we have just done too many thrill rides to be impressed. Frankly nothing beats the old fashioned wooden coasters that are outdoors and last for more than a minute.

The Muppet Vision 3D Movie has a couple of chuckles but 3D movies are now available as full length features at your local movie theaters so they do not have the same wow effect they used to. Also the Muppet Show ended in 1981 which is currently almost 30 years ago – like we said the Disney Hollywood Studios theme park is a little dated.

There is a certain amount of pleasure just wandering around in the different Disney theme parks but even the world create in this theme is not that interesting.

To sum up, we were massively disappointed by our visit to Disney Hollywood Studios in Orlando. If you are a couple with one or two kids and don’t get discounted tickets you could easily drop $300-$400 for the day. Don’t do it. You and your kids will not be impressed.

Let’s hope our choice of other parks will be better.