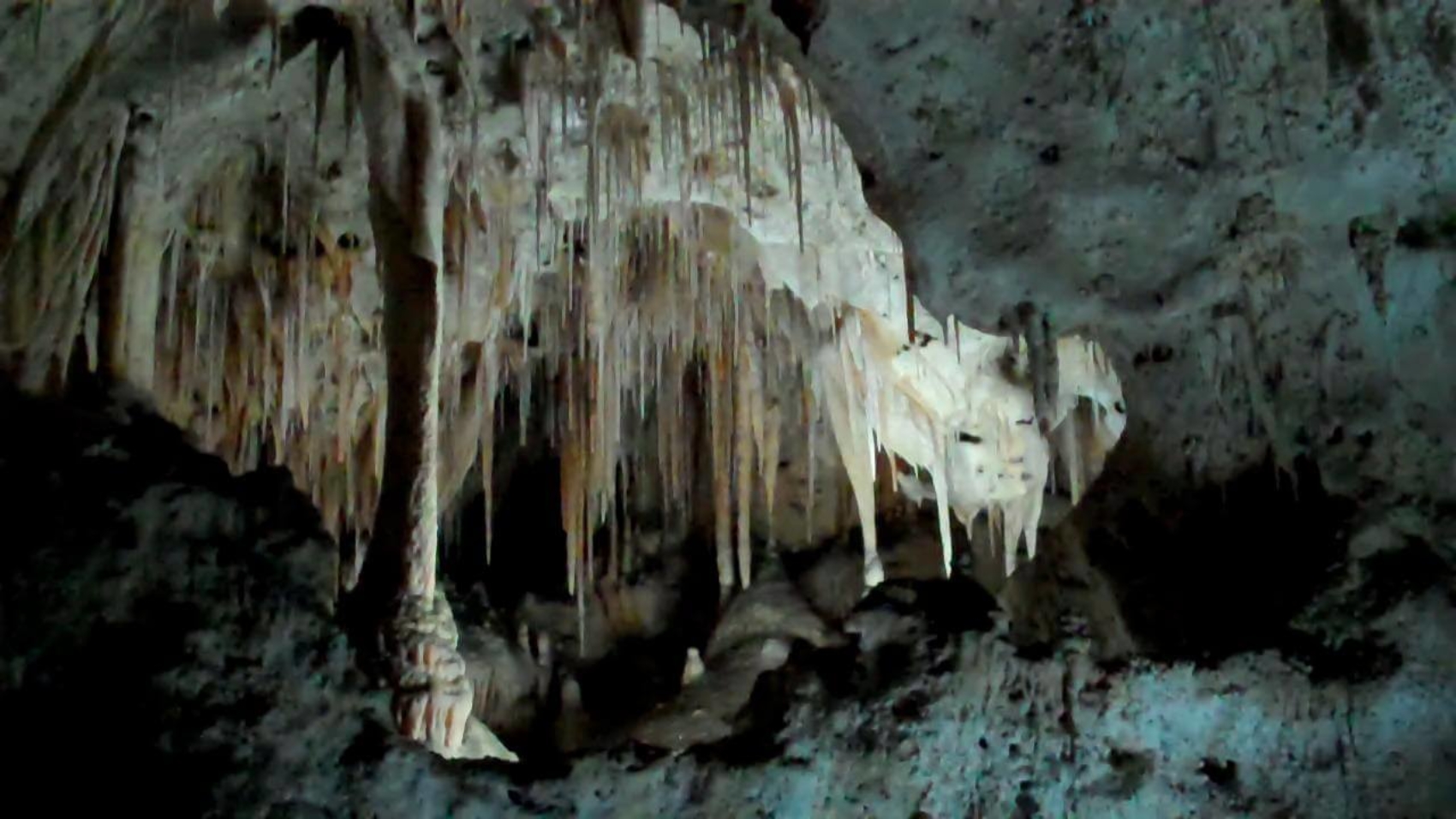 As Geoff mentioned yesterday, we arrived fairly late in the town of Carlsbad and decided to take a motel for the night. I phoned around to get prices and the best we could do was $39, no breakfast, not even coffee and a WiFi connection that was pretty useless. The hotel was old and tired and in much need of repair, but it was clean.

We tried to start off a bit earlier as we didn’t have to break camp this time, just load up the car and go. Since this place didn’t offer any breakfast at all we just had some fruit, cheese and bread and then went looking for coffee as soon as we got on the road. We had remembered seeing a McDonald’s when we came into Carlsbad the night before so we headed there for our coffee and were then on our way to Carlsbad Caverns.

We had checked the admission fee for Carlsbad online just in case it was some ridiculous amount as some attractions can be, but it was really reasonable – just $6.00 each.

It was an interesting walk and the pathways are paved and have handrails. It’s not, however, for anyone that has difficulty walking as it can be a bit tough on the knees and calves because most of the time you’re walking on a downward slope. It’s also not a good idea for anyone that has difficulty seeing in low light. They have done a terrific job of keeping the lighting as unobtrusive as possible but there are spots where it can be a bit difficult to see.

But if you’re okay with all of this then we would certainly recommend taking the natural entrance in and then the elevator back out – which is what we opted to do.

The Big Room of the cavern is huge and it takes over an hour to walk around that, too. There are all kinds of interesting formations and signs giving you explanations and some history that are well worth reading.

We had also read online that the caverns are a constant 56 deg F year round, so we opted to dress appropriately – long pants, long sleeve shirts, jackets and, of course, good walking shoes. We found we didn’t really need the jackets because the exercise involved, particularly if you use the natural entrance, keeps you pretty warm.

If you visit, take your time, don’t rush it. It’s a great experience.

We headed back on the highway and thought we would stop at a rest area and make some soup for lunch. It seems that when you really want a rest area they just aren’t around. We drove for over 100 miles and still nowhere to stop that would have water and restrooms. So, as we were coming into El Paso we opted to stop at a Subway for lunch – it was already about 2:00 in the afternoon.

It was at this point that we realized we could make it all the way to Phoenix if we stuck to the highways. So, we called our friends and asked if it was okay if we arrived today, but it would be a bit late – about 10pm. Being the wonderful friends that they are they of course said that was just fine.

The rest of the day was mostly driving. We did stop at a really cute rest area in New Mexico to make soup for supper. They had several picnic tables all in there own little adobe-style huts. It was quite pleasant. So we used our Jetboil to boil the water for soup (those soup-in-a-bowl instant type soups) and made coffee as well.

Today is also my eldest son’s birthday and even with our on-again, off-again cell phone signal we managed to talk to him at about 9pm his time and wish him a Happy Birthday. Love ya!

We arrived at our friends’ home at about 10:30pm to welcoming hugs, reminiscing and a few glasses of wine. It was so good to see them and they made us feel right at home as they have always done.

It was late to bed after a lot of catching up but we have more catching up to look forward to tomorrow as we will be spending the whole day here.